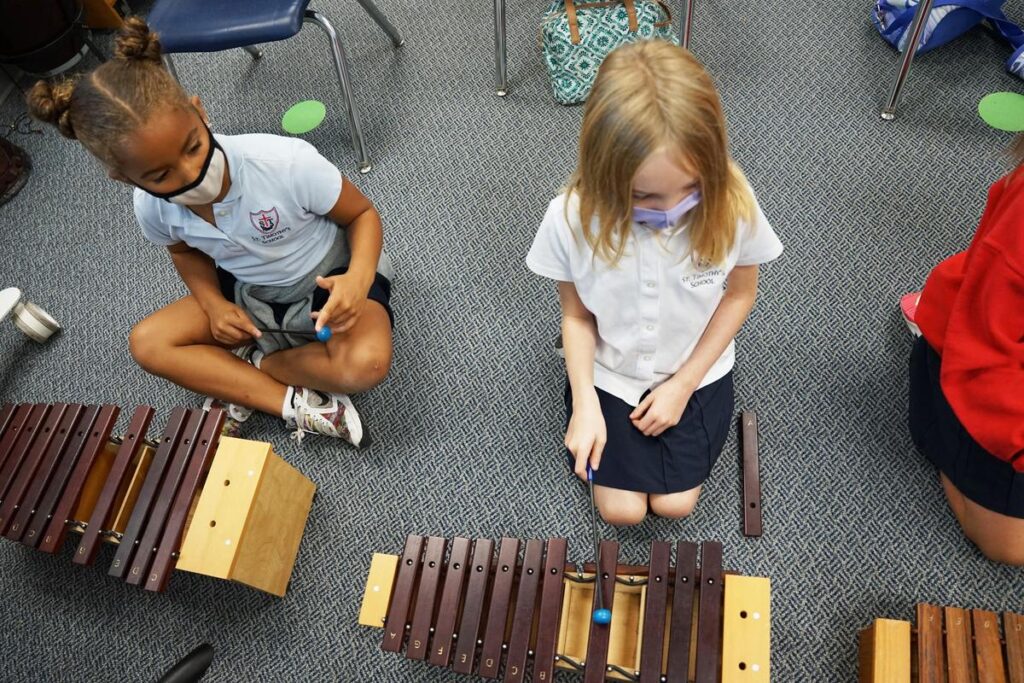 The arts program at St. Timothy’s gives students an opportunity to discover their creativity.  Whether taking drama, visual arts or music, students learn to communicate in a whole new way.

Drama students are practicing the art of conveying emotion in their classes. With the Christmas season quickly approaching, drama teacher Amy Murphy-Archer is working on holiday performances with her middle school students. Each grade has either written an original play or chosen to perform scenes from a classic, like A Christmas Carol.

Once the roles are cast, students begin blocking the plays. In theater, blocking means positioning actors on the stage to determine audience sight lines and stage movement. The process helps to direct the audience’s gaze and allows viewers to connect emotionally with the performance.

Lower school art teacher Laura Bierer is teaching her students about the importance of shapes and colors. Pre-kindergarteners recently completed the Big Fish project. Students used oil pastels to create lines on a fish drawing, then painted and cut the shape out. The image was glued onto a paper to create the finished artwork.

Kindergarteners are also diving into the sea with their art. Bierer taught them about contrast by using cool colors to replicate the ocean and warm colors to draw sea creatures.

Fourth graders drew on their knowledge of shapes and colors to create designs inspired by Molas, an art form invented by the Kuna Indians using fabric and thread. First, the students drew a tropical animal realistically with shapes, then added design elements with color to make the image more abstract.

Middle school art teacher Phoebe Guice is expanding on the basic principles of art with her projects. Fifth graders used colors, shapes, values and lines to create their favorite foods. They also put a van Gogh-inspired twist on the fall season by creating multi-media pumpkins under a starry night. Sixth graders discovered the art of illustrating and writing comic strips.

After studying the “Mother of American modernism” Georgia O’Keeffe, seventh graders created their own skull and flower drawings. Students also learned how to draw realistic hands while working on a sign language hand art project.

Throughout the first trimester, eighth graders drew album covers and created comic books. Guice also introduced eighth graders to zentangles, which are structured patterns made up of dots, lines, curves and circles. Students developed their own zentangles featuring an animal.

In music classes, students in pre-kindergarten through first grade are working on self-control and movement. Jordan Shaw, who teaches pre-kindergarteners and kindergarteners, and Joe Farmer, who teaches first through fourth graders, show students how to dance to the beat by teaching dance routines and following directions in songs like “The Goldfish Song” by the Laurie Berkner Band. They also use desk bells to improve self control, as students have to wait to play when they see the proper note.

Second graders are learning about meter by identifying strong and weak beats. Students use their names to create rhythm patterns and have started practicing the songs and dances for the Pumpkin Parade.

Introduced last year, the Rainbow Ukulele curriculum is still a big hit in fourth grade. Students can collect colored beads as they demonstrate various knowledge and skills on the ukulele. They learn to play a basic set of chords which allows students to begin playing songs quickly. Fourth graders also learn how to read tablature, a special kind of music notation.

With thriving music, fine arts and drama programs, students are able to unleash their creativity and think outside the box. We are grateful to have such incredible arts programs at St. Timothy’s!