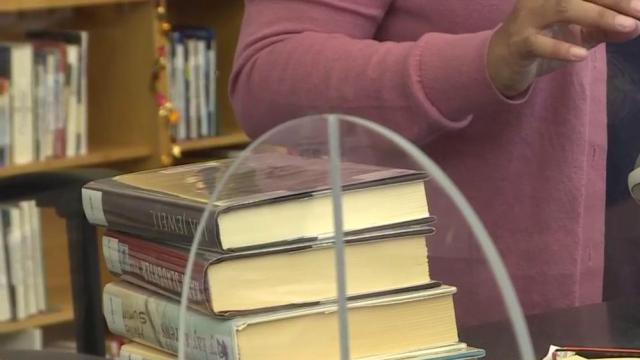 RALEIGH, N.C. — Women’s History Month actually got its start in schools in the late 1970s as a curriculum initiative across Sonoma County, Calif.

By 1987, what began as a week-long educational event in March expanded into the whole month and was declared a national “celebration” by Congress. The goal, whether a month or a week, has always remained the same – to honor the remarkable contributions and achievements of women in history.

With this in mind, I’ve put together a list of books that can help families not only celebrate this month, but perhaps expand their roster of historical women. From scientists to athletes, war heroes to librarians, there are books here for all ages and genders. To help your family select what’s best for you, I’ve arranged these recommendations from those more suited for the youngest audiences to older teen students. Happy reading!

From hosting tea parties with her Komodo dragon, Sumbawa, to bringing a crocodile to school, readers will be delighted by the exploits of the London Zoo’s first female Curator of Reptiles, Joan Procter. Vibrant pictures fill the pages of this charming book about a girl whose passion for reptiles helped the world learn to love them too. Ages 0-8.

When Pura Belpré moved from Puerto Rico to New York in 1921, she longed to see the stories of her homeland in her library. In this beautifully illustrated retelling of Pura’s journey from librarian and puppeteer to published author, readers will fall in love with the stories she brought to her community and the story of her life. Ages 0-8.

The Girl Who Thought in Pictures: The Story of Temple Grandin by Julia Finley Mosca, illustrated by Daniel Rieley

As an autism activist and renowned animal scientist, Temple Grandin has not only revolutionized the livestock industry, but inspired millions with her ability to use her neurodiversity to relate to animals. Told in a catchy rhyming verse, this biography is perfect for young and old fans of “The Questioneers” series. Ages 5-8.

It’s a fairly well known image by now – a woman running in the 1967 Boston Marathon, while an angry man chases behind, grabbing at her race bib. Well, now you and your family can read about this historic moment together. Her Fearless Run follows Katherine Switzer as her love of running grows throughout her youth and culminates in her historic bravery as she challenges the notion that running was an exclusively male sport. Ages 8-12

Written in a graphic novel format, this biography of the cosmetic mogul is extremely well researched and full of information about the first female self-made millionaire. This is a great book to give the future entrepreneurs in your life some inspiration and a new role model. Ages 8-12.

The Radium Girls: Young Readers’ Edition: The Scary but True Story of the Poison that Made People Glow in the Dark by Kate Moore

Almost 100 years ago a group of women fought against dangerous working conditions, saved the lives of their co-workers and changed history. Unfortunately, they also lost their lives. This middle grade version of Kate Moore’s best-selling book is as fascinating as it is heartbreaking, but emphasizes the heroic actions of these young women and how they became a national inspiration. Ages 10-14.

Ten Days a Madwoman: The Daring Life and Turbulent Times of the Original “Girl” Reporter, Nellie Bly by Deborah Noyes

Journalist Nellie Bly’s daring adventures brought to light injustices not only in the stories she chose to cover, but in the newsroom itself. This fast paced and well researched biography tells the story of how her actions pushed boundaries and helped other women gain access to the type of reporting that is change making. Ages 10-14.

World War II brings with it an opportunity for women to realize a dream that was previously unimaginable, to become a pilot in the Army Air Force. This has always been Ada’s dream, but the fact that she is a Black woman, means it is still unattainable – unless she can figure out another way. But is it worth it? Though an historical fiction, there is plenty to learn from this story about the Women Airforce Service Pilots (WASP), including how gender and race have been intertwined as obstacles for women. Ages 12-17

Hamilton and Peggy!: A Revolutionary Friendship by L. M. Elliott

Peggy Schuyler is arguably the least known Schuyler sister, but not anymore. This historical fiction retelling of the friendship between Peggy and Founding Father, Alexander Hamilton, uses letters and journals as primary source materials to craft a thrilling story of coded messages, war and, of course, love. Ages 12-17.

Ada Blackjack: A True Story of Survival in the Arctic by Jennifer Niven

When four British men and a young Innuit woman head off into the Arctic in a grab for new British territory, no one could have imagined that the woman, Ada Blackjack, would be the only one to emerge from the wilderness – 2 years later. Niven uses previously unpublished diaries and interviews to tell the heroic story of survival that Ada Blackjack never told the public herself. Ages 13+.