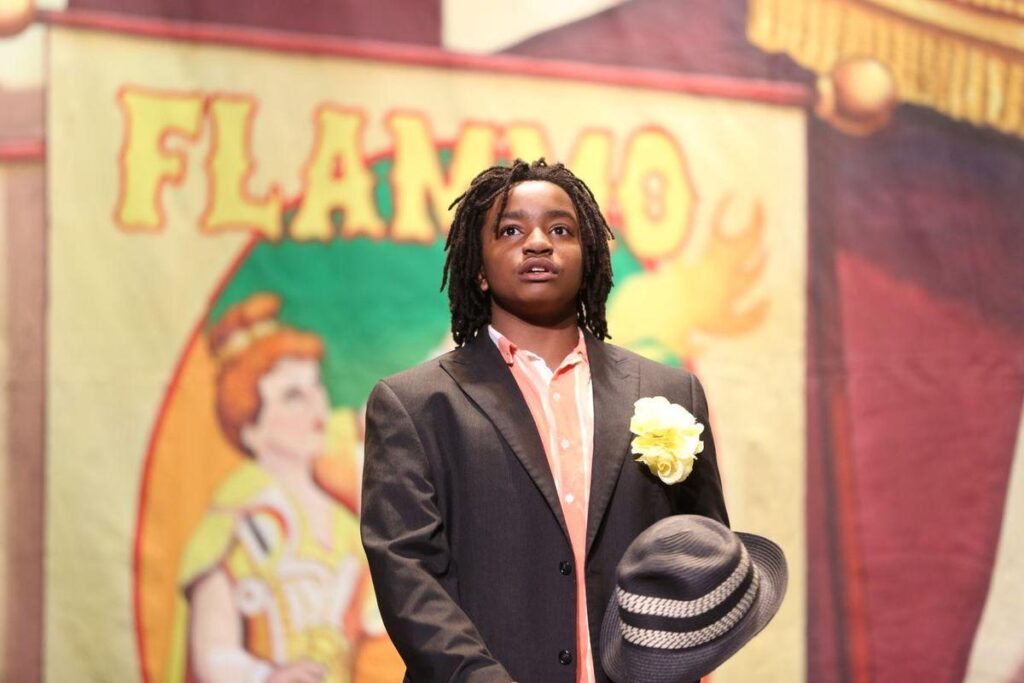 Spring is blooming—and so is the arts program at St. Timothy’s. Every St. Timothy’s student is immersed in the arts: lower schoolers have drama, music, and fine art co-curricular classes and middle schoolers choose one of the three to take for the year.

Drama teacher Amy Murphy-Archer and her middle school students have put in countless hours throughout the second and third trimesters to perfect their skills for the spring plays. During April 23 and 24, students showed off their hard work with seven performances at William Peace University.

Fifth graders put on a production of Cinderella, sixth graders performed Peter Pan, seventh graders and one eighth-grade class enacted Baker Street Irregulars and the other eighth-grade class acted out And Then There Was One. More than 540 parents, grandparents, siblings, friends, and faculty members attended the performances.

For the first time in two years, kindergarteners performed the Easter Hat Parade in person for parents and grandparents on April 8. They sang, danced, and played instruments while showing off their decorated Easter hats. Joe Farmer, who teaches music to second through fourth graders and directs the middle school chorus, has been busy preparing for the Band and Chorus Concert on May 25. This year’s chorus is the largest yet with more than 80 middle school students. The group will venture to Kings Dominion to perform at the Kings Dominion Festival of Music on May 13.

Lower school art teacher Laura Bierer teaches all of her students to create art out of clay. Pre-kindergarteners used the soles of their shoes and various tools to create texture on clay, then cut their favorite part out with a heart-shaped cookie cutter. They glazed the hearts and added beads to create one-of-a-kind necklaces.

Kindergarteners applied their knowledge of shapes and colors to make brightly-colored clay fish.

First-grade artists crafted Native American-inspired pots by using the two-thousand-year-old pinch pot technique. They used styluses to carve symbols and later applied glaze. After learning how to draw animals, second graders created their favorite animals out of clay. These clay sculptures will go on exhibit in a 3D Peaceable Kingdom.

Third graders built upon the skills they learned in previous years to make clay pots with a variety of attachments. Bierer said, “With this open-ended project, there is great variety. Some students create realistic animal pots and some create abstract teapots! They are confident with clay because they previously learned how to create designs and attach items.”

Fourth graders use their knowledge of clay art—rolling out clay, design-creating, pinch pot making and attaching—to make a realistic mask of an animal found in North Carolina. After firing the sculptures, the students glazed their pieces. The masks were fired again, then many fourth graders added squirt paint details, pipe cleaner whiskers or feathers.

Middle school art teacher Phoebe Guice shows students how to build upon the skills they learned in lower school. Fifth graders recently learned about zentangle art which is a form of meditation while an artist creates simple, unplanned patterns. Students created zentangle-inspired artwork in the form of umbrellas.

Sixth graders refined their drawing skills by using charcoal to draw an animal on cardboard. Seventh graders drew on their clay knowledge to create claymation videos in small groups. Eighth graders have been learning about fine art photography and micrography, which is small text that forms an image when viewed from far away.

Through drama, music and fine arts classes, St. Timothy’s students learn how to express themselves in creative ways.